Spring has started and Summer is not long to come. Here are some reasons why choose hotel Senaria for your holidays.

Italian elegance, attentive service, great value. Being located in one of the most beautiful corners of picturesque Anacapri town, Hotel Senaria is the ideal place to live a unique and relaxing holiday experience.

Design is key. Wrought-iron beds, Philippe Stark armchairs, extreme comfort. Hotel Senaria’s rooms are characterised by a simple, yet elegant style. An ideal retreat to enjoy the experience of a holiday in wonderful Capri island. 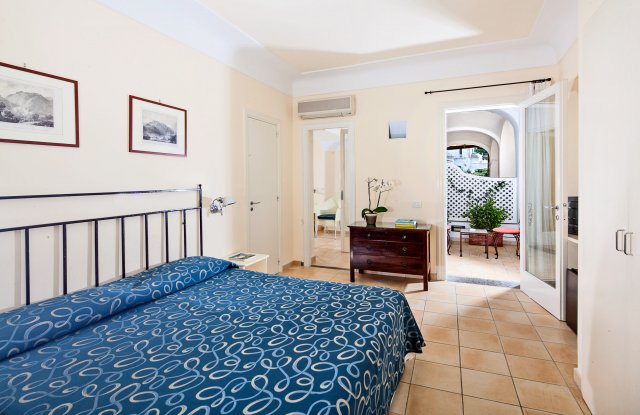 The hotel is also partner with Mensana Fitness Center, which features Technogym equipment and relies on the expertise of highly qualified professionals to deliver a top-quality, made-to-measure service.

Hotel Senaria is located right in the in centre of Caprile area, one of the oldest, yet most beautiful areas in Anacapri town. The hotel is within walking distance of all the bus stations and stops to/from Capri town, the port, Faro di Punta Carena (the Lighthouse) and renowned Blue Grotto. Which means that all the island’s major destinations can be reached in just a bunch of minutes. 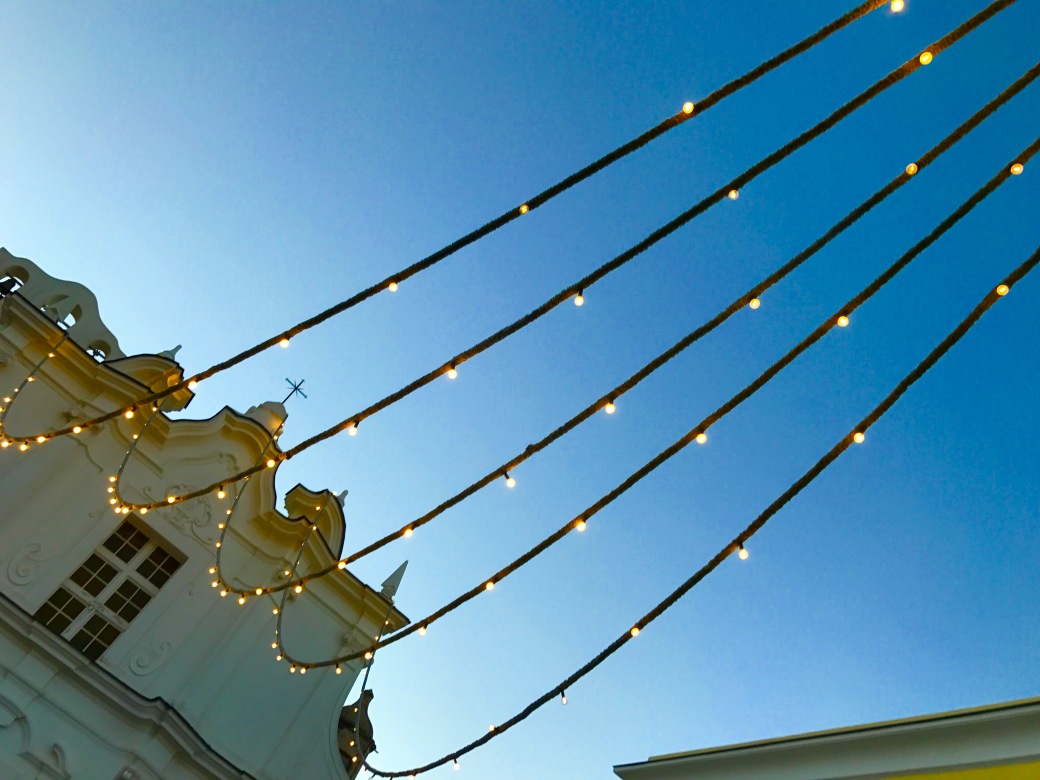 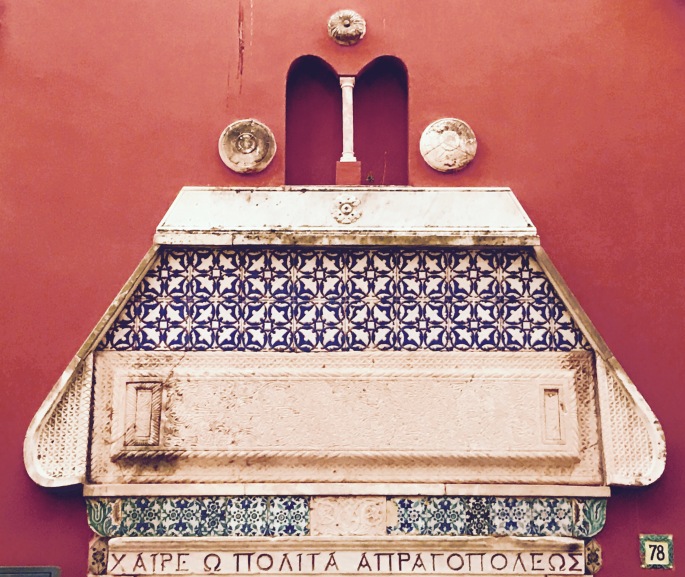 It doesn’t matter whether it is sunny, or cloudy. Capri is always fascinating, and is always plenty of things to do.

First, a great variety of trails for tracking lovers leading to wonderful spots. An amazing way to enjoy the beauty of local greenery and nature.

Museums. Capri island has a thousand years history which visitors can discover and appreciate.

Casa Rossa is one of them. A peculiar piece of architecture storing remarkable works of art. The building is located right in the centre of Anacapri town, just steps from hotel Senaria. 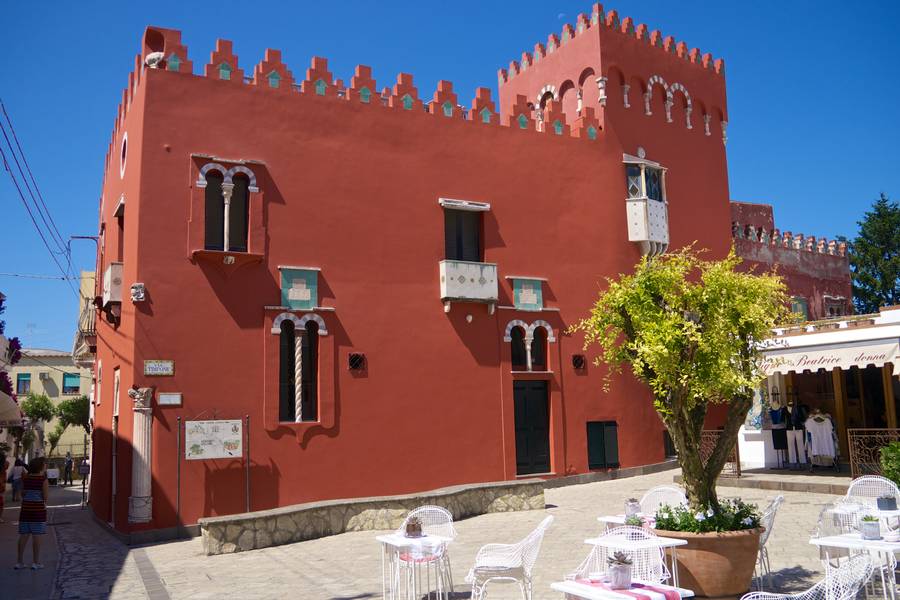 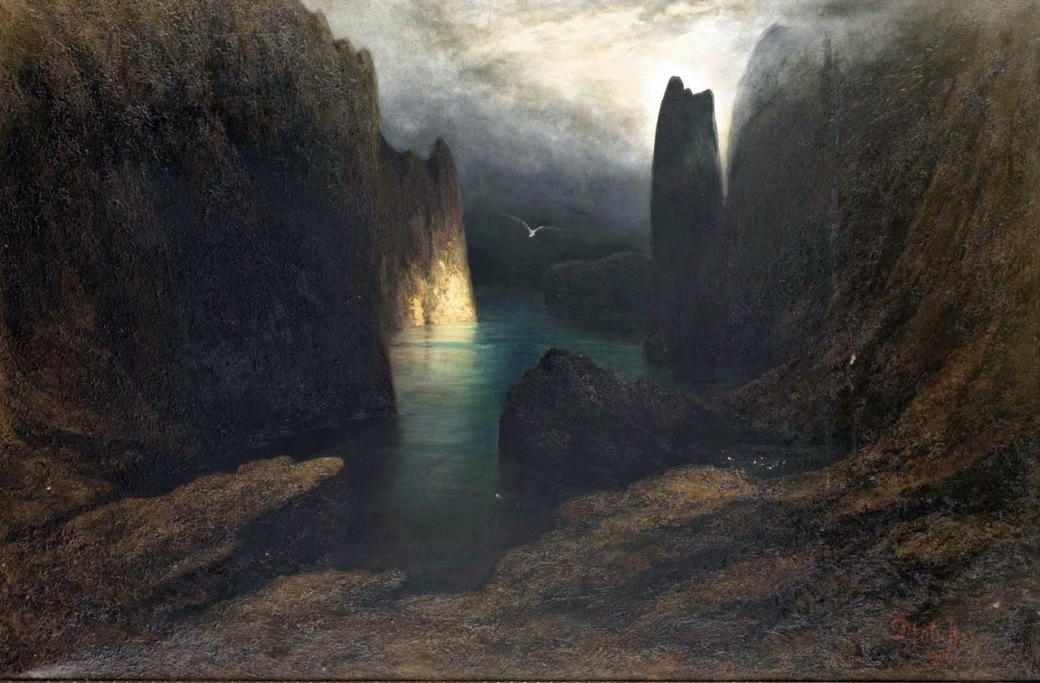 Contemporary art galleries provide another pleasant solution for those who love culture.

These are just hints into the many activities to engage in. Stay tuned to discover more!!! 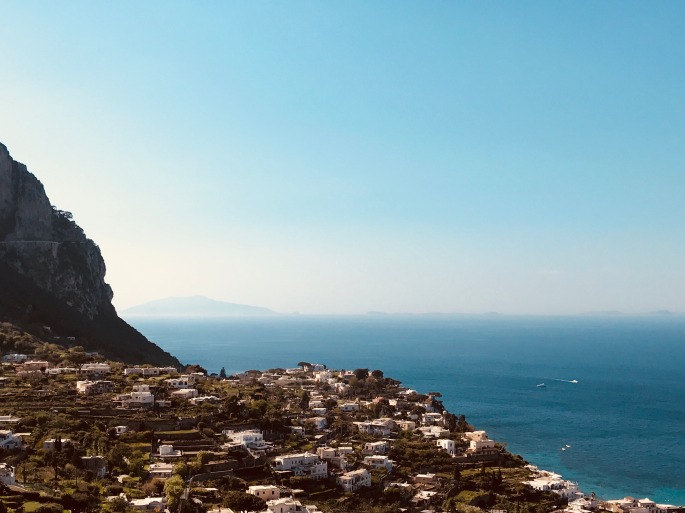 Capri island is a whole world to discover. A world of many beautiful things to do and see that you will always remember. Each and everyone of such things in turn represent a reason to come back. 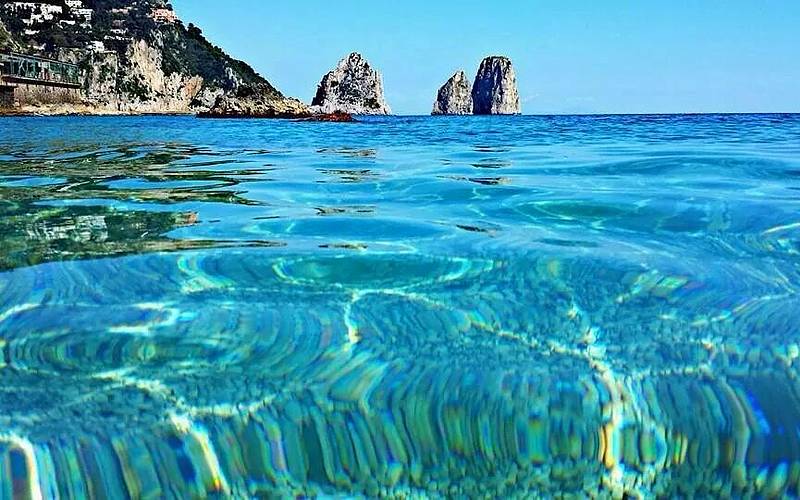 Capri is in fact right in the middle of the gulf of Naples, which allow visitors to reach such places as Ischia island, Procida island, the city of Naples itself, Pompeii, Sorrento and the Amalfi coast in just a bunch of minutes.

Speaking of Capri, Hotel Senaria is located in the heart of Anacapri town’s historic centre. A very picturesque place. The ideal location to live a real Mediterranean experience.

An intimate and romantic location, far from Capri town’s fancy rustle duzzle, which is still something worth of experiencing. 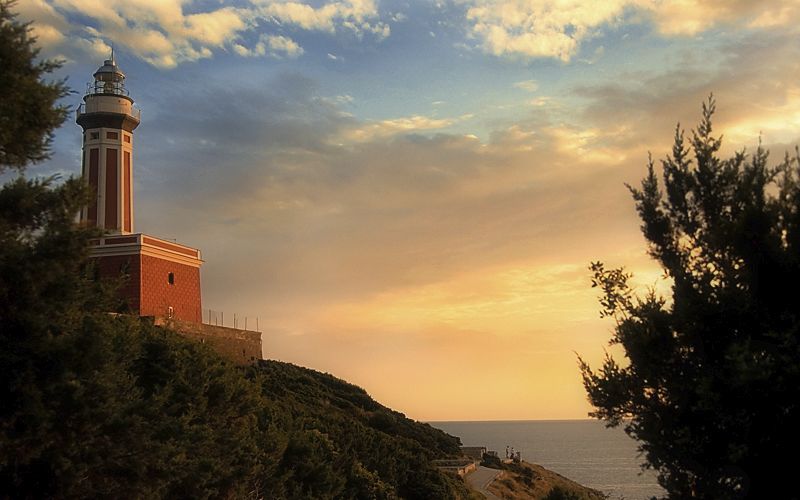 Hotel Senaria is just a bunch of minutes from such amazing places as the Lighthouse and the Blue Grotto.  Places you will almost certainly fall in love with. 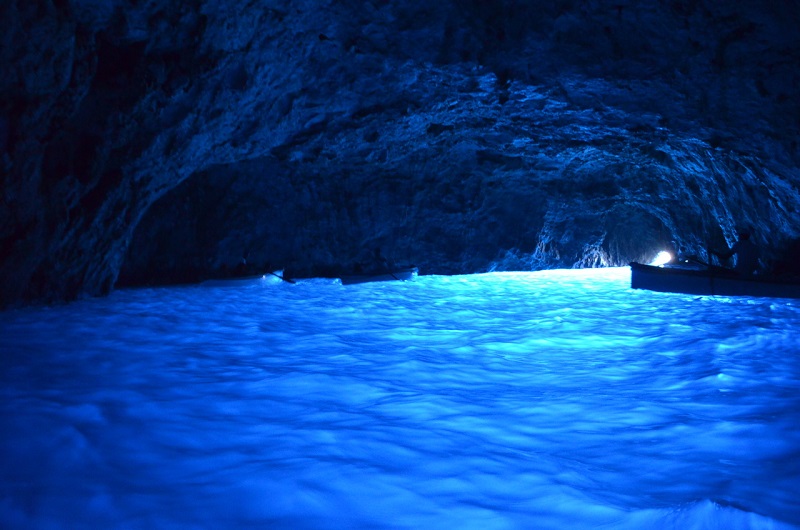 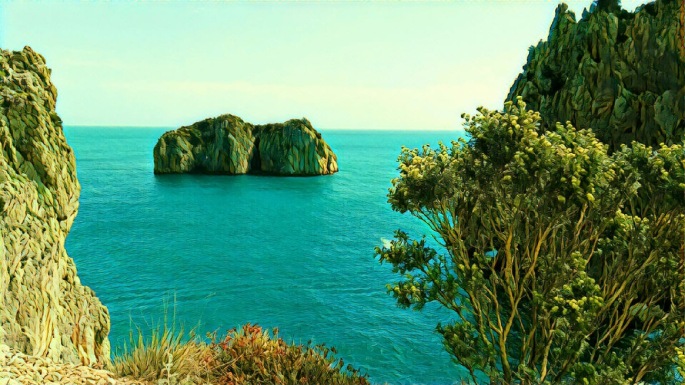 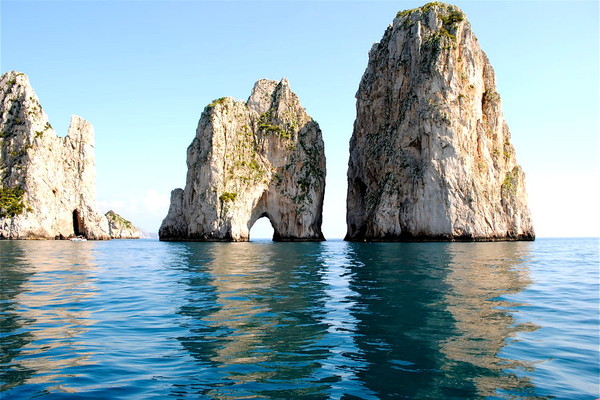 However, not everyone knows that a further faraglione exists. It is called ‘Scoglio del Monacone‘. A possible English translation might be the Monk’s rock. But this is just a conjecture, as the name’s origins is uncertain.

Some believe that the islet is named after the monk seal that is though as inhabiting the norther coast of the island until the beginning of the XX century. Some believe that it was the tomb where the emperor Augustus’ architect, Masgaba, was buried.

Some others have that the islet was natural basin to salt fishes, or a site for rabbit breeding.

What is instead certain are the geological origins of this strangely beautiful rock. It is, in fact, a piece of Sorrento Peninsula, which was submerged by the sea thousands and thousands years ago. 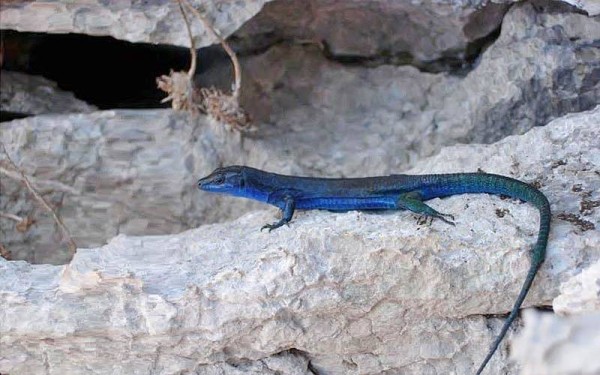 The ‘Scoglio del Monacone’ is also home, along with the third faraglione from the land, to the famous, very rare and almost impossible to find anywhere else in the world, blue lizard. 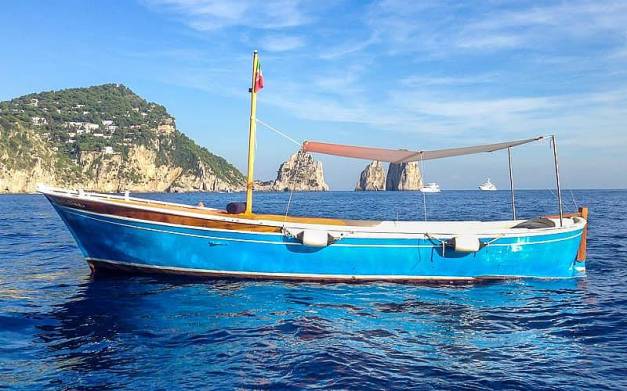 This is just one of the many wonders to visit taking a boat tour around the island on the traditional ‘gozzo‘. Ask our hotel staff about how to enjoy such a trip!!!

Capri, a far from the crowd place to live the relaxing experience of a Mediterranean holiday.  Spring certainly is the best season of the year to enjoy such an experience.

This is true for a number of reasons. Let us assume that you would love to stroll down one of the island’s many fancy, typical streets, or sit at the table in famous ‘Piazzetta’. April, May and early June, when the island’s nature gives its best, are the best time for that.

The scent of blossoming flowers and blooming Mediterranean Scrubland, also know as ‘Macchia Mediterranea‘, is, in fact, something quite unique. 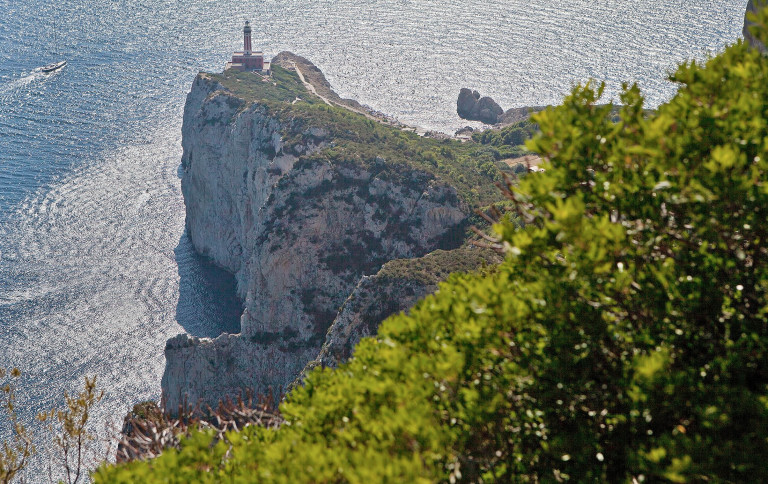 Let us also say that you like hiking. Though it is a small island, Capri offers dozens of hidden pathways and trails leading to the most stunning views. A pleasant experience thanks to Spring’s mild temperatures.

Colours. Capri in Summer, with its bright, vibrant and joyful colours is quite something. But, if you’re looking for nuances, infinite shades and gradients of warm colours, sunset in May is what you most surely want. 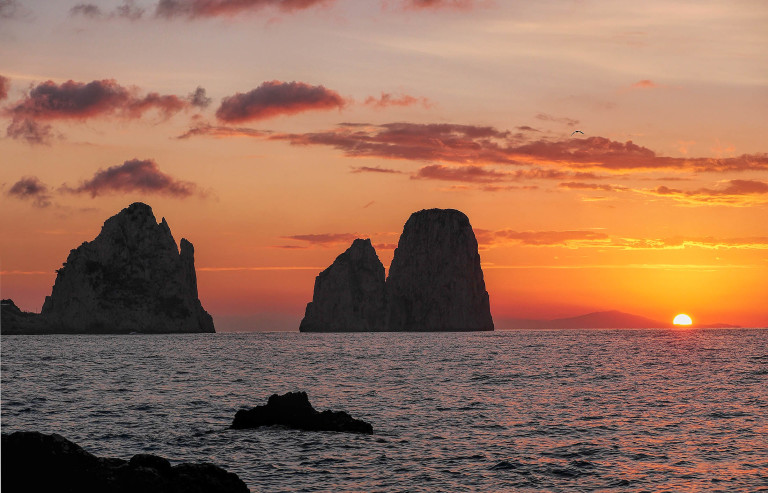 As the sun goes down, the sky get painted with a spectacle of colours words cannot describe. 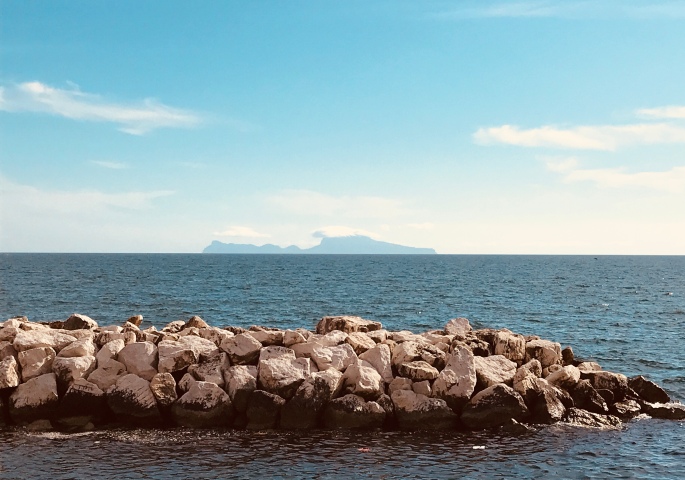 This is Capri island from ‘Lungomare di Chiaia‘, Naples’ beautiful waterfront, stretching from majestic ‘Castel Nuovo’, where the very peculiar ‘Borgo dei Marinari’ lies, a sort of fishermen citadel, in the east, to wonderful ‘Mergellina’ area in the west.

Naples’ seaside has been recently revamped and turned into a pedestrian area. An array of restaurants, bars and bistrot serving delicious local food.

Just imagine strolling down the city’s seafront on a wonderful Saturday afternoon savouring an artisanal ice-cream, a fresh breeze coming from the sea, a breathtaking view, the air filled with the delicate smell of Neapolitan coffee.

It takes nothing to get to Naples from Capri. Just 45 minutes by fast ferry and 1:30 h by slow ferry.

A city of thousand years history, founded in 9-8th century BC as one of the most important Magna Grecia’s cities. The traces of such an important Greek past are still largely visible today, as the town’s historic centre known as ‘Centro Antico’ maintains the same urban structure and layout as nearly 3000 years ago.

The area has been listed as one of UNESCO’s intangible sites. And it is definitely worth visiting it!!! 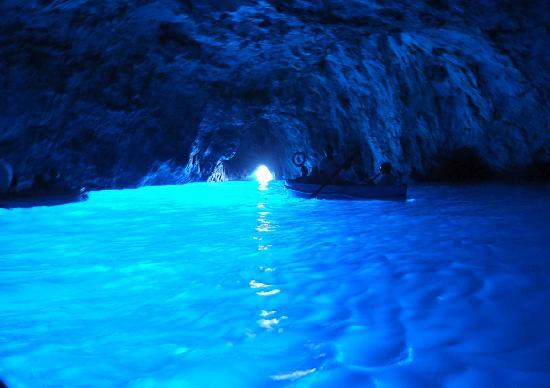 The Blue Grotto. One of the most renowned in the world. Everyone talks about it. Still, a mysterious place that inspired fascinating stories.

Being located on the north-western side of the island is not visible from the outside visible. During high tides, the only way to enter through is small mouth cave is swimming.

So, how to enter it in bright, sunny days?

Board a tiny, traditional rowboat. Lie down. For it is not possible to enter it staying seated, least of all standing. The boatman grabs a chain hooked into the rock and pulls. In less than one second you find yourself into the dark.

It takes a couples of seconds for the outline of the cave emerge. Then, the magic. The cave’s areblue/emerald-colored, due to very particular lighting conditions.Light, in fact, comes from two sources. One is the tiny mouth at the waterline. The other is an underwater hole ten times larger than the former. As you dive in, your skin turns blue. 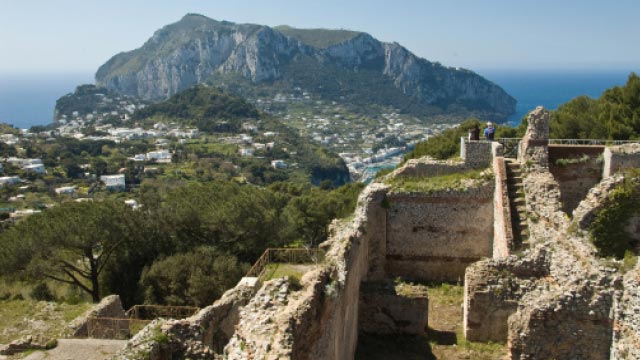 Blue grotto is thought to be Emperor Tiberius’ personal swimming hole and temple. Geometry of the cave is also quite complex and mysterious.

Three connecting passageways at the back of the main hall lead to the ‘Room of Names’, named after the graffiti visitors left over the centuries. Two more passageways lead deeper into the internal cliffs of the island, and are said to be leading straight to the Emperor’s villa. Which one is that remains unknown. 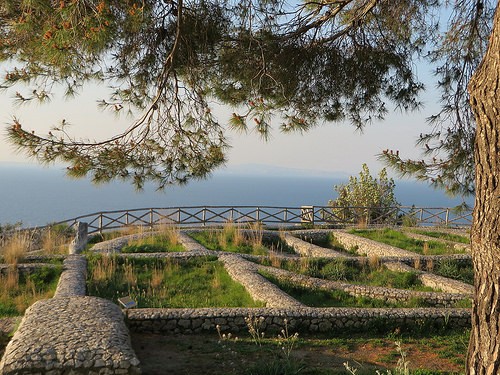 It can be either the most renowned villa on the top of the mount on the opposite side of the island – Villa Jovis; or the villa located on the road leading to the cave in Anacapri – Villa Damecuta; or another villa on the northern side of the island, in the area known as ‘Palazzo a Mare’ – quite nothing remaining of it. Or it can be the three of them. No one really knows.

The whole story is surrounded by mystery. And that’s fine. Maybe it’s mystery that makes this story fascinating. 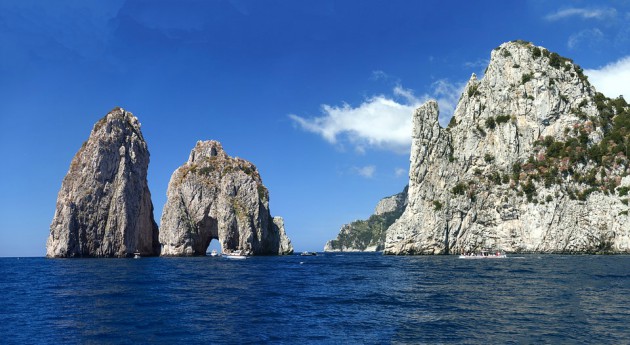 Spring is just around the corner. Capri does give its best during this time of the year. Winter is certainly mild on the island, but Spring offers the spectacle of nature blossoming: the colours and scents of local greenery and flowers filling the air.

The island is the idea location for a nice, romantic week-end. Here are three things to do and see to spend a lovely time.

Boat tour around the island. Hire one of the traditional local boats known as ‘gozzo’ and let Capri’s cliffs to amaze you. 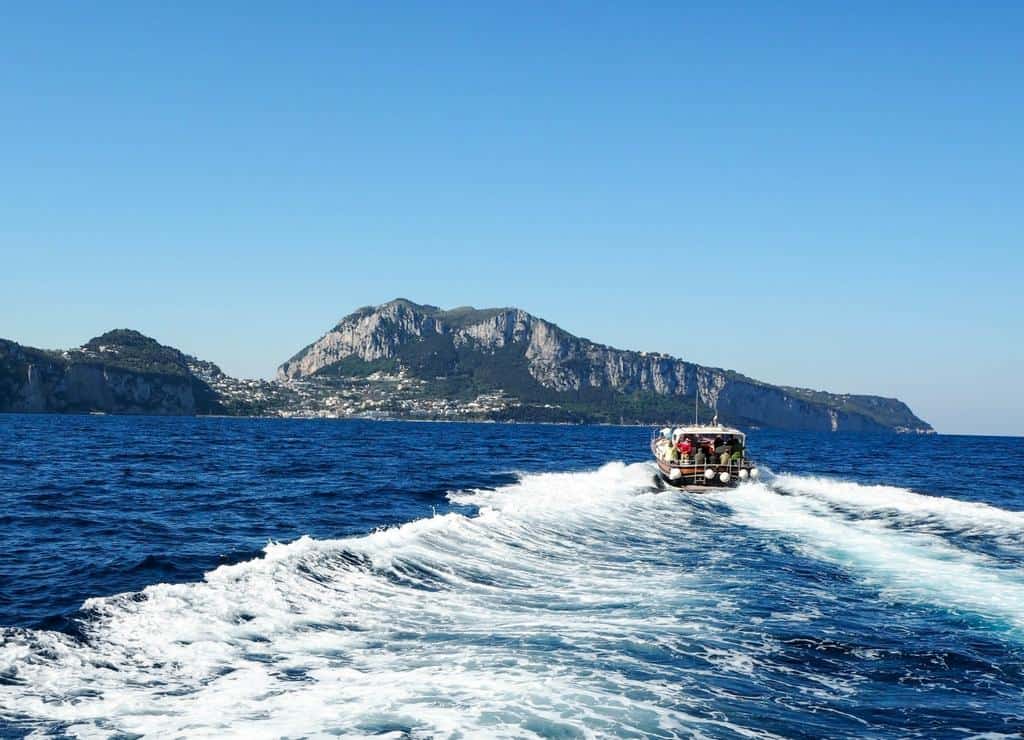 A stroll around Capri and Anacapri town’s streets and alleys. It may be a small island, and it surely is, but Capri island is various and diverse. The two towns share a stunningly beautiful nature. Still they have a different identity. Capri town is a place for glamorous shopping and fancy lifestyle. 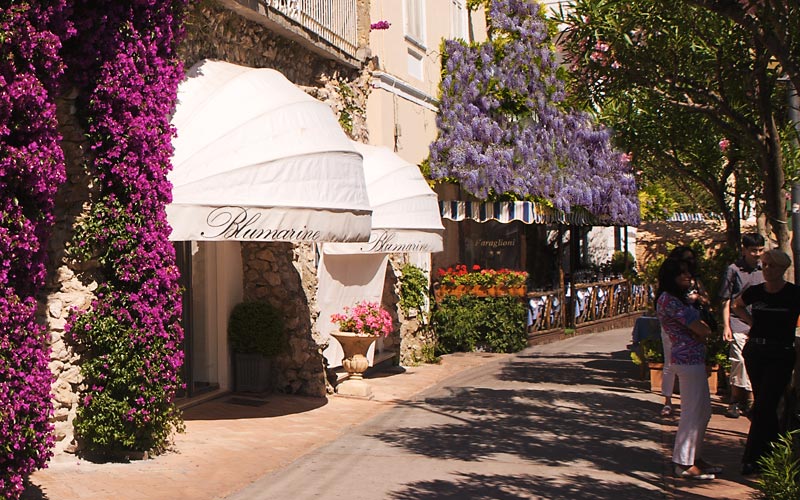 Anacapri is where life beats a different rhythm. Small restaurants, original bistros, artisanal workshops. Life like it once was, with a Mediterranean flavour.

Ancient ruins. Under emperor Tiberius rule, Capri was the centre of the Roman Empire. The island offers the chance to go back in time by visiting the majestic Villa Jovis and Damecuta ruins. 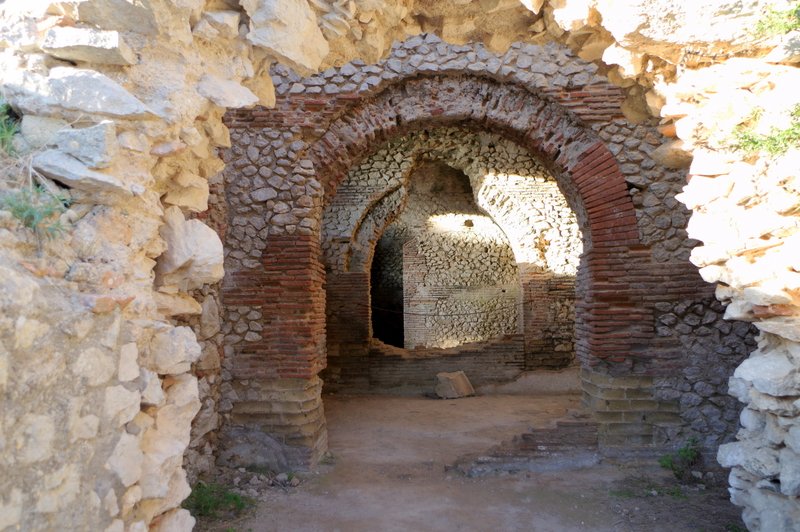 Take a look at our website to find out how to book your Spring holiday!!! 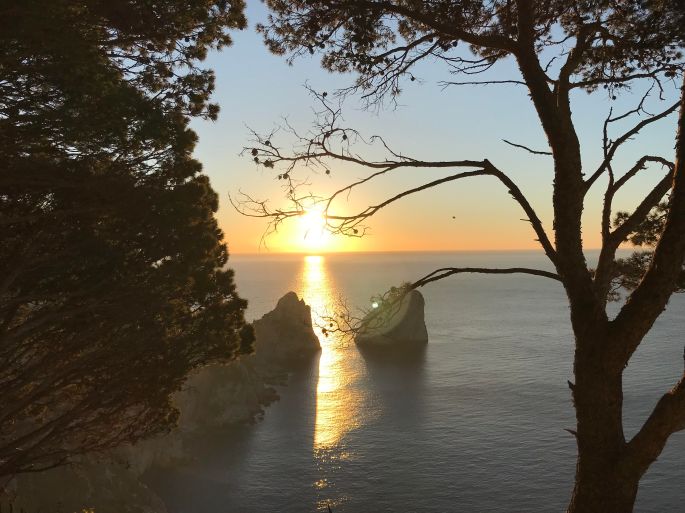 January is over and we are a step closer to Spring. Capri certainly is the ideal destination for your well deserved Spring break. For a number of reasons.

These are just three of the many reasons why Capri island is the place-to-go for a Spring break. The rest you can find out coming here. 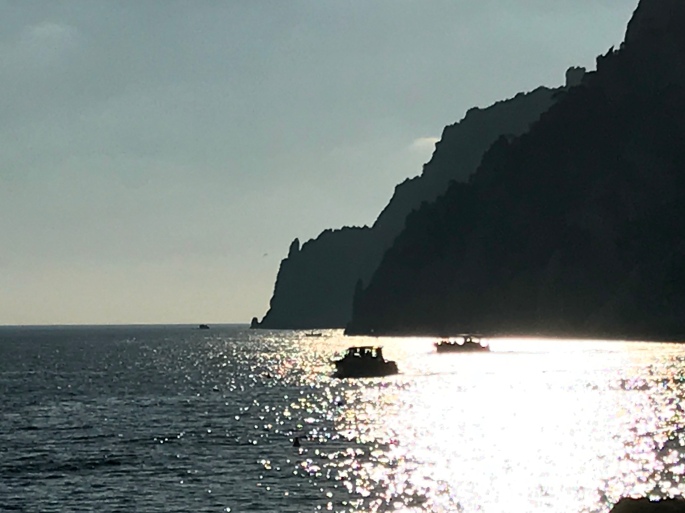 Warm pleasant weather, nature blossoming, the sun shining bright. That’s Spring, one of the most beautiful seasons of the year for those who want to enjoy a perfect Mediterranean break.

This is the season when Capri and its wonderful surroundings give their best. Mild temperatures allow visitors to pleasantly tour the island and all the beautiful places dotting the gulf of Naples (the islands of Ischia and Procida, Pompeii, Herculaneum, Sorrento) and the Amalfi coast.

The island’s little streets and alleys slowly come to life after the Winter, never to become overcrowded, though. A nice and easy atmosphere to do some shopping, trekking, sunbathing and enjoy the delicacies of local gastronomy.

This is just a small, tiny picture of the many beautiful things Capri island offers for those who want to take a break in Spring time and live a relaxing Mediterranean experience.